Q2 Do you think lawmakers should pass a revenue (income) package concurrent with a spending plan, or is is alright to approve spending and then determine how to fund it later?

Q4 Do you FAVOR or OPPOSE a proposed amendment to the state constitution that would limit the annual increase in state government spending to the rate of inflation plus population growth?

Q5 Do you AGREE or DISAGREE that Pennsylvania should allow the placement of Video Gaming Terminals (VGTs) in bars and restaurants, and legalize on-line gaming as a means of generating additional tax revenue?

Q6 Do you AGREE or DISAGREE with a proposal to borrow money from future tobacco settlement fund payments to the Commonwealth of Pennsylvania to help fund the current year’s budget deficit?

Q7 There is a bill before the legislature that would call a limited (governance, structure) state constitutional convention. Do you AGREE or DISAGREE that it is time for the Pennsylvania state constitution to be reformed/amended?

Q8 The state Supreme Court recently struck down a 20-year-old law that allowed impairment evaluations by medical professionals of long-term injured workers compensation cases. Are you aware of this decision?

Q10 Congress has not repealed and replaced the Affordable Care Act (Obamacare) nor has it enacted any significant reforms to the current system. Does this lack of action from Washington, D.C. have any impact on your business?

Q11 Over the past year have costs for providing health insurance to your employees:

Q12 Would a failure by congress to enact significant reforms to the nation’s tax structure have any impact on the future of your business?

Q13 As of mid-September Congress has failed to take action on health care, tax reform and other major issues. Who do you hold responsible for this lack of action?

Q14 In general, do you think business conditions in Pennsylvania are better, the same, or worse than they were SIX MONTHS AGO?

Q15 LOOKING AHEAD SIX MONTHS, do you think business conditions will be better, the same, or worse than they are now?

Q16 Are employment levels at your company higher, the same, or lower, than they were SIX MONTHS AGO?

Q17 LOOKING AHEAD SIX MONTHS, do you anticipate that employment levels at your company will be higher, stay the same, or be lower?

Q18 Have your company’s sales increased, stayed relatively the same, or decreased during the PAST SIX MONTHS?

Q19 Do you expect your company’s sales to increase, stay relatively the same, or decrease during the COMING SIX MONTHS?

Q20 In general, do you have a POSITIVE, NEGATIVE or NO OPINION of the job performance of the following individuals?

Q21 In general, do you have a POSITIVE, NEGATIVE, or NO OPINION of the job performance of the following institutions?

Q22 Which category best describes your position at the business in which your work:

Q23 In what part of Pennsylvania is your business located? 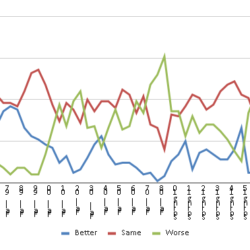