Give the Devil His Due

The tragic mass shootings in El Paso and Dayton prompted the nation’s pundits and politicians to once again play the blame game. We had various sources blaming Donald Trump, as well as predictable arguments about insufficient gun laws, about the shooters political-ideological beliefs and motivations, about the shooters being mentally ill, or about a culture lacking values, morals, proper family life.

Personally, I find myself again and again in these episodes retreating to another diagnosis, one that might not apply perfectly in every situation, but I think needs to be acknowledged. This is evil. Plain, pure, unmistakable. Evil exists, and this is it, personified.

Of course, many of us say that in these situations. In this case, however, there may be more to it.

That reality seemed unmistakably clear in the blank face and empty eyes of the El Paso shooter, who looked like he was possessed by something. It’s even clearer in the statements of the Dayton shooter, Connor Betts, and those who knew him.

“He was in a dark place,” a young woman who knew Betts told Fox News. “He heard voices in his head.”

She wasn’t the only saying that. The young man’s former girlfriend attested to him hearing voices, being tormented by “dark, evil things,” and having “hallucinations” of some sort. Other friends described him as “kind of dark.”

Can we dare venture a spiritual explanation for these shooters? Consider:

What is chilling about Betts, the Dayton shooter, was that he literally tweeted “Hail Satan” and “HAIL SATAN ETERNAL.” He even ended some tweets with the hashtag #HAILSATAN and stated in his Twitter bio that he was “going to hell” and “not coming back.”

I don’t want to overdo things here. The degree to which this young man might have been devoted to the devil, possibly bordering the demonic, is something I certainly don’t know. I suppose we would need testimony of exorcists as well as psychologists. I do mention it, however, because it’s a fresh reminder that no matter how many excuses we try to come up with after these horrible tragedies so revoltingly common, we should never shrug off the reality that these episodes prove first and foremost that evil exists.

Malcolm Muggeridge said that “The depravity of man is at once the most empirically verifiable reality but at the same time the most intellectually resisted fact.” It was resisted again in these latest shootings, especially by those hoping to conjure up other demons to blame: insufficient gun laws, the NRA, Trump.

Still worse, when the supernatural is brought into this conversation, it’s not always favorable to God. The modern world is more prone to ask where was God rather than where was the Devil.

“The only time some men … ever think of God,” stated Bishop Fulton Sheen, “is when they want to find someone to blame for their own sins. Without ever saying so, they assume that man is responsible for everything good and beautiful in the world, but God is responsible for its wickedness and its wars…. They ignore the fact that God is like a playwright who wrote a beautiful drama, gave it to men to act with all the directions for acting, and then made a botch of it.”

It has been said that the Devil’s greatest trick has been to persuade us that he doesn’t exist. It looks like Connor Betts, the Dayton shooter, emphatically disagreed. He made his dark case, and now he’s not coming back.

For American Radio Journal, I’m Paul Kengor, check out my latest book, A Pope and a President. 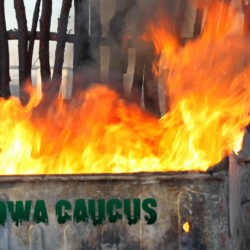