1.) Do you think a high speed train service line should be developed linking Harrisburg with Philadelphia & Pittsburgh?

2.) Do you think a light rail commuter line should be developed linking Carlisle, Harrisburg, Lancaster & York?

4.) Do you think the number of flights and destinations from Harrisburg International Airport should be increased?

5.) Do you think last spring’s increase in gasoline taxes and driver license fees to help fund highway construction was justified?

6.) Do you think school districts in Central Pennsylvania are currently the right size, should they be broken up, or consolidated?

7.) Do you favor or oppose the concept of school choice which would give parents the right to send their children to public, private or parochial schools?

8.) Do you believe public schools should adopt a clear set of academic standards which must be met for students to advance from grade to grade?

9.) Do you think the number of municipal governments should be reduced through mergers, or should they maintain their independence?

10.) Do you think YOUR municipality, that is YOUR city, township or borough should merge with a surrounding municipality, or should it remain independent?

11.) Do you think your municipality is on the right track and doing a good job when it comes to meeting the needs of your community?

12.) Do you feel more regional cooperation with other municipalities in your geographic area would be desirable?

13.) Should municipal governments be required by the state to merge or consolidate, or should such decisions be made by local elected officials?

14.) Do you think the power of LOCAL government over zoning decisions should be eliminated and placed in the hands of the COUNTY?

15.) Do you think local governments should be eliminated and replaced with one countywide government?

17.) Should PA voters be given the right to vote by referendum on key public policy decisions to be made by their county, local government or school district?

18.) Do you feel the property tax-based system currently utilized by local government in PA is fair and equitable to most segments of your community?

19.) If local property taxes had to be replaced with another tax, would you favor a local earned income tax, a local sales tax, or a combination?

20.) Do you think sports stadiums should be paid for with public money or should they be financed privately?

21.) Do you believe PA should sell state liquor stores to private enterprises to help finance the construction of sports stadiums?

22.) Should there be a statewide referendum to allow voters to decide whether or not tax dollars will be spent to build new sports stadiums?

23.) Do you, yourself, favor or oppose a “right to work” law for Pennsylvania?

24.) Do you agree or disagree with the arrangement that requires public employees to support a union in order to work for a government in PA?

25.) Should unions be forbidden from deducting money from union workers pay without their permission, then use that money for political purposes?

This survey was conducted September 13-14, 1998. A total of 311 registered voters in Cumberland, Dauphin and York counties were surveyed. 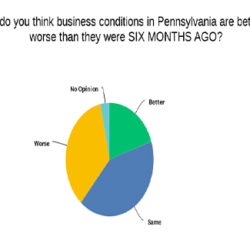 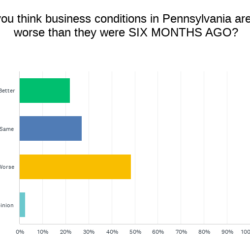