The national electorate including here in Penn’s Woods is almost evenly divided. Presidential elections are being determined by plurality rather than by majority. Democrats hold a one-seat edge in the U.S. Senate, Republicans a slim majority in the U.S. House of Representatives.

At the state level the majority in Pennsylvania’s House of Representatives hinges on just one or two seats with the numerical majority set to vary depending on the timing and outcome of special elections to fill three vacant seats.

This has resulted in legislative paralysis.

The first item of business at the start of a legislative session is to elect a Speaker of the House. With a slim temporary Republican majority likely to soon dissolve into an even slimmer Democrat majority neither side was able to muster enough votes to seat their preferred candidate for Speaker.

A last-minute deal resulted in the election of State Representative Mark Rozzi, a Democrat who pledged to change his party affiliation to independent and sit in neither caucus.

Predictably the legacy news media heralded the selection of an “independent” speaker as a breath of fresh air. There was considerable gushing over the move away from the hyper-partisan climate of the Tom Wolf era.

That novel idea lasted less than a week.

Rozzi backtracked on his pledge to register as an independent. This prompted Republicans who supported his election as Speaker to call out the betrayal and demand his resignation. In the chaos that followed the House was unable to adopt rules and to form committees. Legislative business ground to a halt.

The concept of an independent Speaker was about as realistic as seeing unicorns and purple squirrels cavorting on the Capitol lawn. Rozzi was elected and re-elected as a Democrat and could never have been expected to shed that history. In fact, he could not even pull off the charade.

Even within the electorate at large there are few true independents. A deep dive into voter analytics finds most voters who self-identify as independent actually lean strongly to one party or the other. Thus, even the currently very small slice of the electorate viewed as “swing” voters becomes even smaller.

We have seen numerous pretensions of independence. The legislative redistricting commission that imposed one of the most gerrymandered maps in state history was helmed by a fifth member who was supposed to be independent. That fifth member, former Pitt Chancellor Mark Nordenberg, turned out to be the most highly partisan member of the redistricting commission and bears much of the blame for the current stalemate.

True independence does not exist. More realistic is the concept of bipartisan cooperation. Republicans and Democrats can come together to take important and effective legislative action. For example, at the end of the last session lawmakers agreed on a plan to cut the state’s Corporate Net Income tax (CNI) and it was signed into law by the governor. There are many examples of issues where legislators agree on outcomes but differ on how to achieve their goals.

The hyper partisan divide in state government can be laid largely at the feet of former Governor Tom Wolf. Wolf had a go-it-alone approach to governing that failed to bring folks together to hammer out their differences and build consensus on key issues.

There is a glimmer of hope that will change. Governor Josh Shapiro has talked frequently about bi-partisan cooperation. On the campaign trail he has taken positions that leave open the door for serious discussion on ways to improve Pennsylvania’s business climate and to provide more educational opportunities for our citizens.

As a former State Representative Governor Shapiro has a working knowledge of the legislative process that his predecessor lacked. He also brings significantly more executive experience to the job. His key staff and cabinet appointments to date have been inclusive of individuals from both sides of the political aisle.

Mark Rozzi was thrust into a role for which he had no time to prepare. That, however, does not excuse him from keeping the promises that won him the Speakership. No, he will not be a true independent – but he does have before him the opportunity to work with both sides to craft bipartisan consensus.

(Lowman S. Henry is Chairman & CEO of the Lincoln Institute and host of the weekly American Radio Journal and Lincoln Radio Journal. His e-mail address is [email protected].)

Here’s a critical question for enthusiasts of critical race theory, particularly its growing number of advocates on the religious left:...

We’ve now turned the year, sworn in the 2023-2024 General Assembly in Harrisburg and inaugurated the 118th Congress.  Opportunity abounds... 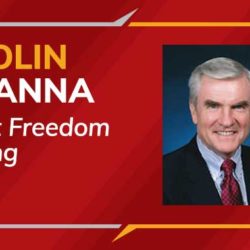 Toward A More Perfect Union

It has been my great pleasure and honor to have known Tim Goeglein for more than 20 years. He was...