Promoting the ideals of free market economic, individual liberty and limited government through the conduct of public opinion research and related educational projects.

Celebrating 25 Years of ‘Taking the Pulse of Pennsylvania’

It All Started with a Napkin…

It all started in November of 1992 with a dinner and a napkin. Yes, a napkin. You’ve seen thousands of them – those plain white paper napkins used in restaurants everywhere.

George H.W. Bush, the liberator of Kuwait, had just been tossed from the White House by Bill Clinton, and Lowman S. Henry were talking about how the conservative movement would fare with the coming to power of a new liberal Democrat administration in Washington, D.C.

Earlier that year, Henry had left his job as President of the Pennsylvania Leadership Council, at the time the state’s premiere conservative organization, to run for State Treasurer. Having met the same fate as George Bush, it was a time for reassessing the political landscape and deciding what should come next. 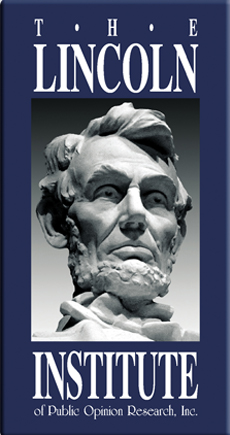 Political Climate of the 1990s

While at the Pennsylvania Leadership Council (PLC), Henry had been frustrated by the inability of conservative and mainstream taxpayers – the overwhelming majority of our state’s citizens – to make their views known to elected officials and policy makers in Harrisburg.

The defining issue came in 1991 when then-Governor Robert P. Casey had proposed and enacted, with the support of some Republicans, the biggest single tax increase in the history of the Commonwealth.

The effect of that tax hike on Pennsylvania’s economy and business climate was devastating. The Pennsylvania Manufacturers’ Association reports over 100,000 jobs disappeared from the state in the years that followed that tax hike. Even today, after nearly eight years of Ridge/Schweiker efforts to undo the damage, Pennsylvania still suffers in terms of reputation and economic performance because of the Casey tax hike.

Debate over the tax increase was dominated by the spending interests. Day after day those dependent on public money rallied nosily in the rotunda of the state Capitol demanding lawmakers raise taxes to fund their cause. Everyone it seemed had their hands out waiting for the state to fill them with gold coins.

At the PLC, Henry was busy trying to rally taxpayer groups and the business community to counter the demonstrators. It was a losing effort. Taxpayer activists could not make it to Harrisburg because they were trying to earn a living and would have to give up a day or two of pay to attend a rally. Small business people, already overwhelmed with the task of keeping their businesses afloat, could not find time to leave their business and go to Harrisburg.

So the demands of the spending interests went largely unanswered. The loud voices of the tax consumers drowned out the pleas for restraint from the taxpayers.

The Lincoln Institute Was Born

It was then that the thought occurred to Henry that we needed another way to make the will of the people known in Harrisburg. He tossed around the idea of forming a public opinion research unit within the Pennsylvania Leadership Council, but the State Treasurer race intervened and the idea remained just a thought.

With the snow falling that November, Al Paschall and Henry revisited the idea. On that infamous restaurant napkin, we sketched out the framework for doing polling, not through an existing organization with a set of policy goals, but through an independent organization established specifically to conduct polling, focus groups, and to educate lawmakers, policy makers, the news media, and the public on key issues and the views of Pennsylvania’s citizens on those issues.

The Lincoln Institute was born.

The Search for Funding

Given the mission of their new organization, Paschall and Henry decided to incorporate as a 501c(3) non-profit educational foundation. That meant recruiting a Board of Directors, and – most critically, finding funding.

Working with a core group from Henry’s PLC days – his wife, Carol, Jane Gordon, and John Hanks –  they made rapid progress on the legal and business end of establishing a new organization. We filed incorporation papers with the Pennsylvania Department of State in April of 1993, and later that year received approval from the Internal Revenue Service to operate as a tax-exempt non-profit organization.

Shortly after deciding something had to be done, Paschall and Henry met with Skip Huston, who had lobbied both in Harrisburg and in Washington, D.C. on behalf of his family business, Coatesville-based Lukens Steel. Skip had left Lukens Steel to take a bigger role in his two family philanthropic foundations, the Huston Foundation in Conshohocken, and the Stewart Huston Charitable Trust in Coatesville.

They turned to Huston for start-up funding, but got much more. Huston became an integral member of the creative and developmental team at the Lincoln Institute, helping us with funding, but also opening doors to other funders. He also became a charter member of the Board of Directors, bringing with him a wide range of nuts and bolts knowledge about running a business, particularly a non-profit entity, and remains to this day one of the biggest boosters of the Lincoln Institute.

With Huston and Paschall, The Lincoln Institute had eastern Pennsylvania representation on the Board of Directors, along with Jane Gordon and Lowman Henry from central Pennsylvania. It was time to bring in several directors from western Pennsylvania, so they recruited Bob Keibler, who had been a candidate for the state Senate from Westmoreland County, and Hilary Holste, a friend and political activist from the same area.

Thanks to Scaife and Huston, the Lincoln Institute now had the funding it needed to begin “taking the pulse of Pennsylvania” as we now say.

With the mechanics and funding in place, The Lincoln Group began polling. Their Keystone Business Climate Survey was among their first efforts and they have surveyed the chief excutive officers of Pennsylvania’s major employers every six months for the past nine years. Statewide voter polls, regional “Pulse” polls, and surveys of such groups as non-profit leaders, agri-business, educators, municipal elected officials, delegates to the national political conventions, and many other groups followed.

The Lincoln Group also developed a unique issues-based focus group concept known as the Public Opinion Court. This allows them to probe a specific issue in-depth with a group of 10 to 12 randomly-selected citizens. Charles Kennedy, an instructor of political science at Penn State – York, has moderated each Public Opinion Court sessions and produced well-received reports on each.

Product now in hand, the Lincoln Group began working on ways to get results of polls, surveys, and focus groups as well as opinion pieces on the issues out to target groups and to the general public.

In the summer of 1995, they published their first newsletter. Initially titled the Lincoln Institute-Sindlinger Economic Report because of our partnership with the late Al Sindlinger, the newsletter eventually became known as Lincoln Journal and has been published quarterly since its inception.

The group learned a lot from Sindlinger, who was one of the most engaging and interesting people Henry ever met. Sindlinger was in his – very active – 90s when he and Henry met on a St. Patrick’s Day in 1995. He began his business in the 1930’s with money staked by none other than former President Herbert Hoover. Sindlinger went on to lead a storied career including a stint as private pollster to President Richard M. Nixon.

It was in the Lincoln Institute-Sindlinger Economic Report that Paschall published his first column. At first, the column was an unnamed op-ed. Then he titled it “We the People” and began sending his work to newspapers in southeastern Pennsylvania. Over the years, the column’s name changed to “Of the People,” “The Circle Game,” and then to its current incarnation: “Somedays.”

“Somedays” continues to be a regular feature in each edition of Lincoln Journal, but it has also blossomed in newspaper syndication. “Somedays” is now ranked 58th among the 100 most widely published columns in the nation. It is the only regional column (it is published only by Pennsylvania newspapers) in the top 100. Today, “Somedays” is published by 91 newspapeers with a combined circulation of 2,700,000 readers.

Lincoln Radio Journal is another Lincoln Institute success story. It began as a monthly program in January of 1995 airing on about a dozen radio stations. Today, there are 84 radio stations affiliated with the Lincoln Broadcasting Network. Over the years the frequency of the programs has also expanded, first to twice monthly, and in October of 2000, to a weekly format.

The move to a weekly program cemented Lincoln Radio Journal’s spot in radio station programming line-ups across the state. The ability to begin weekly broadcasting came with the arrival on the Lincoln Institute’s Board of Directors of Jim Panyard, Executive Director of the Pennsylvania Manufacturers’ Association.

With the support of Fred Anton, Jim brought PMA funding for the project. Jim also serves as host of Lincoln Radio Journal’s “Capitol Watch” segment, which airs on every other program. He is joined by another Lincoln Institute board member, Susan Staub of Pennsylvanians for Right to Work, in a roundtable discussion of key statewide issues.

From that restaurant table on a winter’s day in 1992 through today, the Lincoln Institute has continued to grow and expand both in projects and influence. Along the way, the group also benefited from the board of directors presence of Jim Trammell, formerly with Sun Company and now with the PMA, U.S. Postal Governor LeGree Daniels, Marsha Ord, Joe Geiger of the Pennsylvania Association of Non-Profit Organizations (PANO), Dr. Jake Haulk of the Allegheny Institute, and for a while Liz Ferry then with Betz Laboratories, Jim Canova of Canova Electric, and Jerry Bowyer who is now a radio talk show host in Pittsburgh.

All but one of the Lincoln Institute’s founding board members remains on the board providing tremendous stability in leadership. They have also been blessed with funders, including Bill Boxx of the McKenna Foundation, Sunoco, Verizon, the Eberly, Jones, and Warrell foundations, among others who support our efforts year in and year out.

Perhaps someday there won’t be a need for “taking the pulse of Pennsylvania” or, as Thomas Jefferson observed keeping “eternal vigilance” over the affairs of government. In the meantime, we’ll be there.

Our Board of Directors

The Lincoln Institute is fortunate to have an outstanding board of directors whose dedication and influence has led to decades of success for the organization. 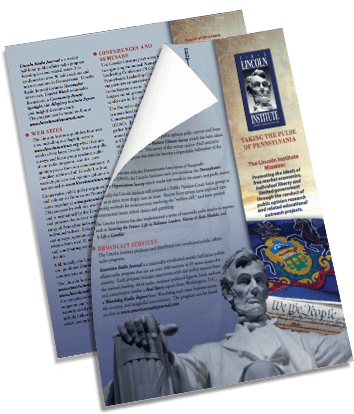