Selection of the next Justice to serve on the Supreme Court of the United States, protecting our constitutional rights, along with jobs and the economy are the top issues concerns for Delegates and Alternate Delegates to the 2020 Republican National Convention. The importance of those issues along with illegal immigration and government regulation rounded out the top five priorities for the Delegates/Alternate Delegates who responded to the quadrennial issues survey of Pennsylvania’s national convention delegations conducted by the Lincoln Institute of Public Opinion Research, Inc.

The delegation was largely satisfied with the federal response to the COVID-19 pandemic as that issue did not make the top ten list of issue priorities for the delegation. That is reflected by the high job approval ratings they give to President Donald Trump and especially for Vice President Mike Pence who heads the National Coronavirus Task Force. The Delegates/Alternates give the President a 96% positive job approval rating for his handline of the pandemic. The Vice President’s approval rating clocked in at 98%, with 74% voicing very positive approval of his role in fighting the pandemic. The U.S. House of Representatives, the Center for Disease Control and especially the World Health Organization were all given strongly negative approval ratings.

At the state level, the Delegates/Alternates voiced strong disapproval of how Governor Tom Wolf and Secretary of Health Dr. Rachel Levine have handled the COVID-19 pandemic. Wolf drew a 95% disapproval rating, with 88% voicing strong disapproval. Ninety-one percent gave Levine negative marks for her handling of the crisis, with 88% saying they strongly disapprove. Both the state Senate and state House of Representatives scored a positive job approval rating of over 70% for their role in battling the pandemic and its economic consequences.

Driving disapproval of the Wolf Administration’s handling of the COVID-19 pandemic is the strong consensus of Pennsylvania’s delegation to the Republican National Convention that the governor has been too slow in re-opening the state’s economy. Ninety-one percent of the Delegates/Alternates say the governor has moved too slowly in re-opening the economy. Four percent say the pace of re-opening has been about right, 2% said he has moved too fast.

The Delegates/Alternates strongly favor amending the Pennsylvania Constitution to give the General Assembly the clear power to place limits on any emergency declaration issued by the governor. Such a proposed amendment is likely to be voted on in the May 2021 primary election as lawmakers were over-ridden by the state Supreme Court in their efforts to end the governor’s COVID-19 emergency declaration. Ninety-six percent of the Delegates/Alternates favor adoption of such an amendment, with 19% strongly favoring the amendment. Four percent disagreed.

Largely as a result of the COVID-19 pandemic the Pennsylvania state budget faces a multi-billion dollar deficit which the governor and the General Assembly will have to deal with following the November election. Eighty-nine percent of the Delegates/Alternates participating in the Lincoln Institute survey said the budget should be balanced only by cutting spending, 12% favored a combination of spending cuts and tax increases. None of the respondents were in favor of balancing the state budget solely through tax hikes.

COVID-19 has also had a dramatic negative impact on school district, county, and municipal budgets. Dealing with those shortfalls will add fuel to the debate over property tax reform. Sixty-eight percent of the Delegates/Alternates to the 2020 Republican National Convention do not think property taxes are fair and equitable to most segments of their community. Thirty percent view such taxes as fair. Relative to school districts, 93% of the Delegates/Alternates support making vouchers or grants available to students who wish to attend a school in a district other than that in which they reside, a charter school or an on-line charter school.

Pennsylvania’ state-run liquor store monopoly continues to be an issue. Eighty-four percent of the Delegates/Alternates favor privatizing the state liquor store system; 14% oppose. Likewise, when thinking about economic development 95% of the state’s GOP convention delegation prefer state government cut business taxes and regulation rather than borrow money and help to finance specific business ventures as an approach to economic development.

As a result of development in the Marcellus Shale region Pennsylvania has become one of the largest energy producing states in the nation. Eighty-two percent of the Delegates/Alternates think that development of that resource has struck an equitable balance between job creation and environmental protection; 11% percent disagreed.

There is an on-going debate over the method by which Justices and Judges are elected to the three statewide appellate courts – Supreme, Superior and Commonwealth. Fifty-three percent of the Delegates/Alternates think those Justices/Judges should be election by region, rather than statewide. Eighteen percent want to continue electing jurists in statewide elections; another 18% favor a merit selection process.

As did the Founding Fathers the Pennsylvania Delegates/Alternate Delegates to the 2020 Republican National Convention believe in Natural Rights, that our basic rights as Americans are God-given and not granted by government. Only one respondent to the Lincoln Institute survey felt that rights are granted by government. Sixty-percent of the Delegates/Alternates also strongly believe that the federal government is primarily an adversarial force when it comes to solving problems; while 32% view the federal government as a positive force.

In addition to being a health crisis, COVID-19 also triggered an economic crisis. The delegation sees the economic recovery as being well underway. Eighty-two percent of the Delegates/Alternates now believe the U.S. economy is headed in the right direction, while 16% think we are going in the wrong direction. The virus is given the lion’s share of the blame for the nation’s economic ills. Sixty-seven percent cited COVID-19 as an economic culprit. After that 44% cited congress for holding back the economic recovery followed by labor unions, corporate America, and the Federal Reserve.

Among the Delegates/Alternates there is strong support for lowering tax rates to stimulate economic growth: 97% support that approach. When deciding for whom to vote 60% said economic issues weigh most heavily; 33% said they take a combination of economic, social and foreign policy issues into consideration; 5% said they give the most weight to social issues; 2% prioritized foreign policy.

Generally speaking, 91% support free trade policies such as the US/Mexico/Canada Free Trade Agreement (USMCA). Likewise, more domestic drilling and production are viewed by 91% as the solution to America’s energy needs. Development of alternative fuels and conservation were also viewed as a solution. Only two percent supported importing more foreign oil. Seventy-seven percent of the Delegates/Alternates say Trump Administration foreign policies have made the United States much more secure; another 21 % said they have made the nation more secure. None of the Delegates/Alternates think Trump Administration policies have made the nation less secure.

Fifty-one percent of the Delegates/Alternates responding to the Lincoln Institute survey classify themselves as being very conservative; another 47% say they are somewhat conservative; 4% claim to be moderate, and nobody classified him/herself as liberal/progressive. Sixty-six percent of respondents were male, 33% female. Two percent are in the 18-30 age bracket; 25% are in the 30-50 age group; 43% are between the ages of 50-65; and 30% are over 65.

The 2020 Republican Delegate/Alternate Delegate Survey was conducted by the Lincoln Institute of Public Opinion Research, Inc. electronically between July 23. 2020 and August 23, 2020. A total of 59 Delegates/Alternate Delegates participated in the survey. The Lincoln Institute has been surveying delegates to the two major party nominating conventions since 2000. A survey of Democratic Delegates/Alternates to the 2020 Democratic National Convention has not yet been conducted as the Democratic State Committee has ignored repeated requests for Delegate/Alternate Delegate contact information. Complete numeric results of the Republican survey are available at www.lincolninstitute.org.

Given the restrictions on large gatherings, and out of concern over the health and well-being of our attendees, the 2020... 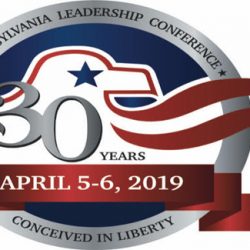 (Harrisburg, PA) – Conservatives are set to gather this Friday and Saturday (April 5th and 6th) at the Radisson Penn...

(Harrisburg, PA) – The 30th anniversary 2019 Pennsylvania Leadership Conference to be held April 5th and 6th at the...